What is CRIFM's Fetal Dock?

In the past, things that were not known until birth are now known before birth, but even so, there is no end to the number of babies who are found to be sick after birth and brought to centers, and children who are found to have congenital diseases several years after birth.

The Fetal Dock at CRIFM is a prenatal diagnosis using a precise ultrasound examination.

For example, in a The Fetal Dock at around 11-13 weeks of pregnancy, we can examine the fetus, which is less than 10 cm in length, in great detail to check for swelling (called NT), normal position of the nasal bones, face, ears, heart, etc., normal number of blood vessels in the umbilical cord, and normal blood flow in the blood vessels in and before the heart.

CRIFM offers fetal examinations at 11-13 weeks, 18-20 weeks, and 29-30 weeks of pregnancy. The tests are designed to meet the needs of the growing baby.

Dr. Pooh is the first licensed FMF in Japan.

The First Trimester screening (11-13 weeks) focuses on checking the baby for swelling (NT) and the position of the nasal bones, face and ears.

The 2nd (18-20 weeks) and 3rd(29-30weeks) Trimester screening includes more than 30 tests to check the baby's brain, heart structure, fingers and toes, lips, and the lens of the eyes, while the late fetal dock also checks the development of the cerebral cortex, such as wrinkles in the brain. If any abnormality is suspected in the baby, a more detailed examination will be conducted.

The baby's father can also go into the examination room with the mother to look at the echo images.
*As of March 2021, as a precautionary measure against COVID-19, we ask that mothers enter the room alone.

(*)FMF……A UK-based charity organization established to improve the health of mothers and their babies through research and education in fetal medicine.

What a CRIFM Fetal Dock Can Tell You

In the very early stages of pregnancy (6-10 weeks), the condition of the baby and uterus are examined before the early fetal scan.

Early scan can detect morphological developmental abnormalities in babies in the early embryonic stage, when their organs are not yet formed into a human being.

The Early Scan can be performed by the mother alone.

Both mothers and fathers can feel the joy of having a small baby, thinking, "How can I see so many things in a baby of only 1-3 cm?

*You cannot take the Early Scan only. This is an ultrasound examination performed only for those who undergo the first trimester Fetal Dock.

If the genetic ultrasound (fetal disease risk assessment) shows a high probability of Down's syndrome, trisomy 18, or trisomy 13, you will be offered the option of a chromosome confirmation test called a CVS (a definitive test that reveals not only Down's syndrome and trisomy, but also other chromosomal abnormalities) at 12-14 weeks. This is an option. A high risk result does not necessarily mean that you have a disease. 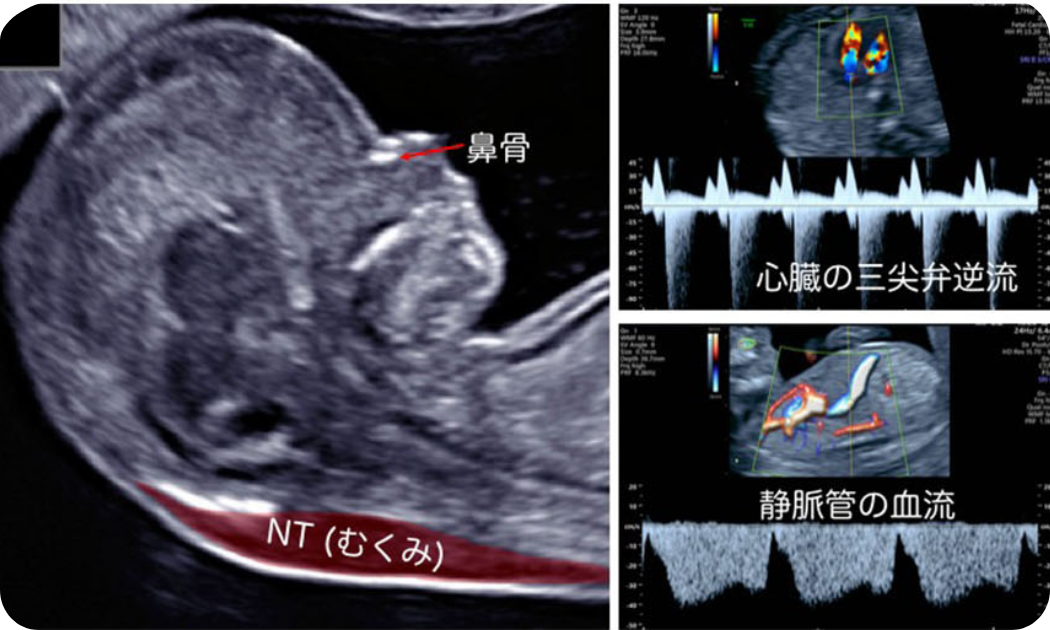 Many of those who are found to be at low risk can be given a combined test (NT, fetal heart rate + early maternal serum markers) to give another angle of fetal disease risk. This combined test is used as a standard early pregnancy test all over the world, including Europe, the United States, Asia and Africa.

Even if the risk is low, if there is a suspicion of fetal disease on ultrasound, or if there are indications such as old age, history of abnormal pregnancy, equilibrium translocation of either mother or father, or preeclampsia, the chorionic examination option can be selected after counseling.

CRIFM examines the following essential items in the early fetus: NT check (swelling of the baby's neck), lymphatic fluid accumulation and general swelling, separation of the left and right brain and structures in the brain, nasal bone, jawbone development, orientation of the heart axis, four chambers of the heart, position of the gastric follicles, lung-liver border (diaphragm), bladder, extremities, number of blood vessels in the umbilical cord, blood flow in the umbilical cord, blood flow in the venous vessels, and tricuspid valve regurgitation in the heart.

If there are areas that cannot be seen due to the position or orientation of the baby, the examination will be repeated. If not required but can be checked, the left and right kidneys, spinal ribs, and cardiac outflow tract will be looked at.

The left and right sides of the brain, the fibers called the corpus callosum that connect them, the ventricular system, the condition of the periventricular system, the cerebellum, the four chambers of the heart, the movement of the valves, the aorta and pulmonary arteries that leave the heart, and the veins that enter the heart. The spine, the bones of the fingers and toes, the number of blood vessels in the umbilical cord, and the location of the umbilical cord coming out of the placenta are also observed in detail to make sure that the blood flow of the fetus is going well.

A precise ultrasound examination can reveal morphological abnormalities such as abnormalities in the brain, face, heart, spine, limbs, etc. Occasionally we can find the fetal tumors which develop in the late pregnancy.

Flow of examination in the 3rd Trimester Screening

In this way, we can confirm whether the cerebral cortex is developing well or not.

Differences from Fetal Dock at Other Hospitals

When Dr. Pooh first named it in Japan in 2000, it referred to Dr. Pooh's original fetal checkup system.

Today, the name "Fetal Dock" is used by many different facilities, but the meaning and content of Fetal Dock differs from one facility to another. Pooh's original Fetal Dock has also evolved rapidly since its naming in the year of 2000.

Please understand that the Fetal Dock at CRIFM is a CRIFM original and by no means is the same content of the Fetal Dock performed at other facilities.

Ultrasound images can be viewed on medical imaging cloud services.

We use Tricefy, a medical imaging cloud service, which allows us to share ultrasound images of the fetus directly with the mother's smartphone.

Of course, the images can be stored on the cloud with thorough security, so the lovely images of the baby can be viewed anytime, anywhere, from any device.

CRIFM's fetal dock with ultrasound is both a genetic ultrasound (to give the probability of Down's syndrome, etc.) and a morphological diagnosis (quite a lot of congenital malformations are diagnosed early these days) at once.

Therefore, strictly speaking, ultrasonography is not only a screening test, but also a diagnostic test in a sense.

Prenatal diagnosis is the beginning of CRIFM Care

At CRIFM, we believe that prenatal diagnosis is not the goal, but the beginning.

If we find any abnormality in your baby, we will explain the condition of your baby based on objective and accurate imaging diagnosis. We will provide you with the latest information on the clinical course and treatment of each disease, which is advancing day by day, and we will discuss with you and your mother what preparations you can make for your baby.

CRIFM does not deliver babies or provide treatment, but we will refer you to an appropriate medical institution based on the condition of the baby and the wishes of the mother and father.

The entire staff at CRIFM will support mothers and fathers in dealing with their babies until the end of their lives.

If you have any concerns about your baby, why don't you check the health of your baby with Dr. Pooh. Please feel free to call us first.

All appointments are by appointment only. Appointments can be made by phone (until the end of the clinic) or by using the "Appointment Form" on our website, so please feel free to make an appointment. Please remember to bring a letter of introduction written by the doctor who take care of you, health insurance card, and maternal and child health handbook with you when you come to the clinic. If you do not have a letter of introduction, you will need to pay an additional fee of 5,500 yen (tax included).

Currently, in order to prevent COVID-19 infection, only mothers are allowed to visit the clinic. Dads and other family members are asked to wait in the "Family Kizuna Lounge".